It was Sergei Eisenstein, in a series of essays written in the early 1940s (later published as Eisenstein on Disney, and as Sergei Eisenstein: Disney – edited by Oksana Bulgakowa and Dietmar Hochmuth, Potemkin Press 2013), who described Disney’s films (and by extension all animated cartoons) as having the quality of plasmaticness:

“The rejection of the constraint of form, fixed once and for all, freedom from ossification, an ability to take on any form dynamically. An ability which I would call ‘plasmaticity,’ for here a being, represented in a drawing, a being of a given form, a being that has achieved a particular appearance, behaves itself like primordial protoplasm, not yet having a stable form, but capable of taking on any and all forms of animal life on the ladder of evolution.”

Walt Disney + Ub Iwerks: Steamboat Willy 1928. This was the short animated film that launched Disney’s most famous anthropomorphic character, Mickey Mouse. Eisenstein would have been thoroughly familiar with cartoons from Disney, Fleischer, Hannah-Barbera and other animators of this period.

Eisenstein envied the animator the freedom of the mythological shape-shifter – the ability to change the forms of his character to illustrate their evanescent identity, their dual or multiple nature, or to illustrate and express metaphorically their change in temperament or mood. Potemkin Press describe Eisenstein’s objective in the blurb for Sergei Eisenstein: Disney:

“His essay on Walt Disney was part of his unfinished book METHOD, a study of the relationship between archaic thought and art practice. Disney becomes the central subject of analysis, because in his work the synesthetic affects of sound and color, and the perfect visual rhythm unite with animism, totemism and the plasmatic qualities of form. Eisenstein discovered in these distinctive characteristics of form a long genealogical ancestry and a deep yearning for the freedom that could allow one to imagine and even represent differently the relations of man and nature.”

Walt Disney: Fantasia 1940. Disneys rather self-conscious masterpiece of this early period was of course Fantasia (1940), which drew upon the talents of his astonishing team of animators, the Philadelphia Orchestra, several classical compositions, and the arrangement and conducting skills of Leopold Stokowski. Thjis cel is from the section The Sorcerer’s Apprentice – one of eight animated sections in Fantasia. 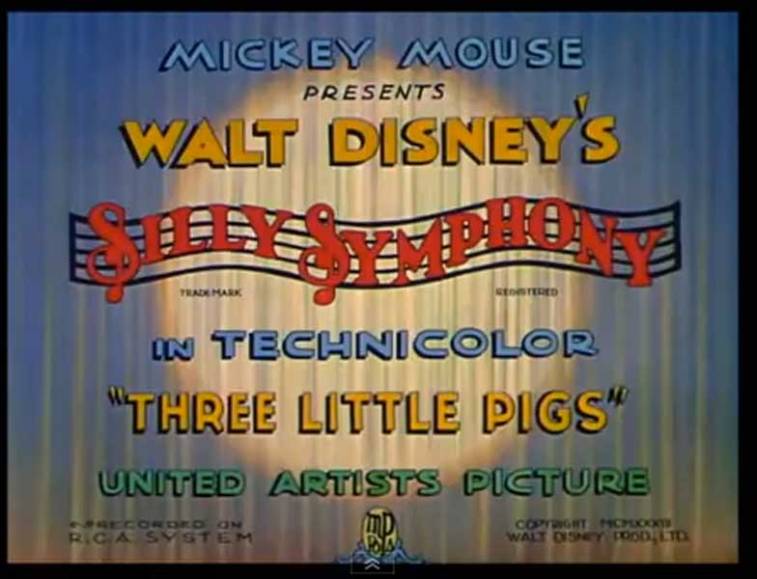 Eisenstein was so impressed with Disney’s work that in 1935, when he was a judge at the Cannes Film Festival, he insisted that Disney’s Three Little Pigs should get first prize. But it was the general ability of animators to create with total artistic (and ‘plasmatic’) freedom that was entrancing Eisenstein. Of course the possible synergies between animation and live-action cinematography had surprisingly been realised almost from the very beginnings of Film. As early as 1900,  James Stuart Blackton had been employed as an artist on one of Thomas Edison’s shorts The Enchanted Drawing (1900) that illustrated this potential synergy.

James Stuart Blackton/Thomas Edison: The Enchanted Drawing 1900. Using stop-motion, the filming of an artist drawing where the drawing is made to animate in response to the artist’s drawing, was a major innovation in the history of film, pointing the way to the invention of rotoscoping by Max Fleischer in 1917, and flagging the potential of special effects.

Dave Fleischer + Max Fleischer: Mechanical Doll 1922. The Fleischer brothers invented a rostrum rig for creating rotoscoped animations in 1917. Rotoscoping involved back-projecting live action cine frames, one frame at a time, onto a translucent drawing board so that animators could trace-over the live-action image and convert the live-action to animation. Here, 5 years later the Fleischer’s explore the natural outcome of their rotoscoping process in this short animation integrating live-action and animation.

For 1922, this is really innovative. Fleischer had invented a rotoscoping rig in 1917, and I guess that the use of this rig would suggest this delightful synthesis of live-action and cel animation – a practice made world famous some 60 years later by Disney in his Who Framed Roger Rabbit (1988) 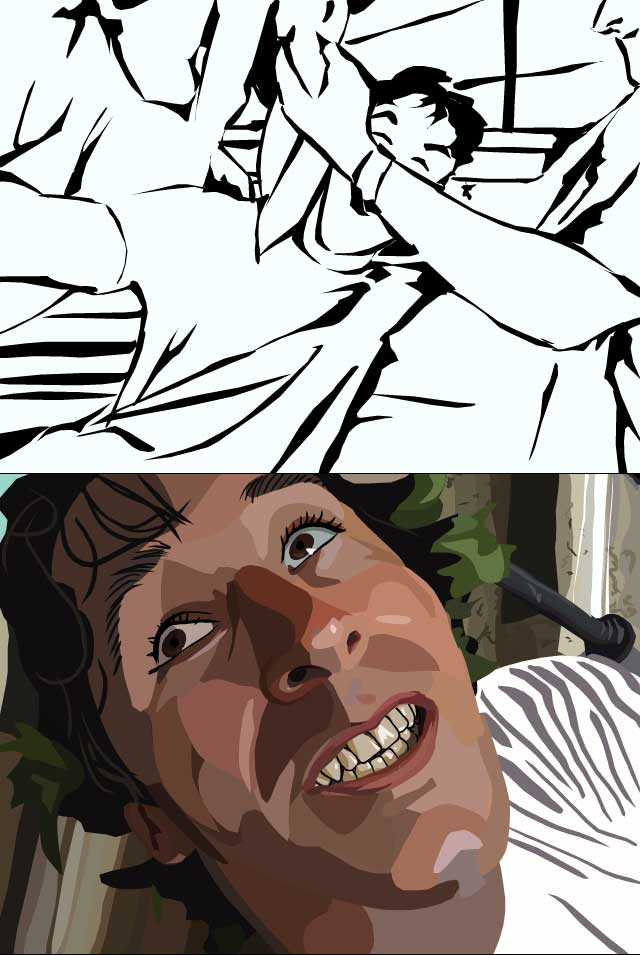 Bob Sabiston/Flat Back Films: Rotoshop 2001. Sabiston’s Flat Back Films made quite a stir with this semi-automatic rotoscoping software. Experiments in computerised cartooning stem from at least 1990 (see Barlow, Blakemore, Weston-Smith: Images and Understanding (1990)), but Sabiston’s software is state of the art, vastly reducing time spent on the human interpretation of source material and manual rotoscoping. 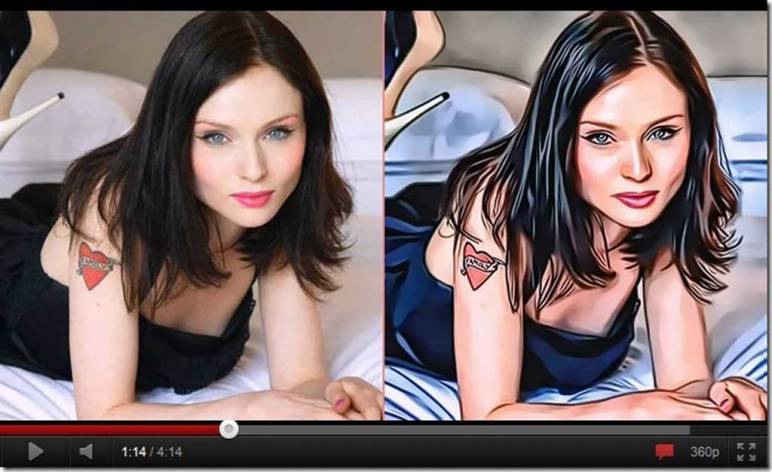 Autoscope 2014 – this app is being developed right now in 2014, and is only available as a prototype. It follows Bob Sabiston’s clever Rotoshop (2001) as an automatic rotoscoping tool – rather successfully as far as the examples illustrate.

The modest developer of Autoscope (identified on his website as Paul, describes his Autoscope software:

“I turn normal videos into cartoons through the process of rotoscoping, or, to be more precise, autoscoping (don’t look it up; it won’t be in the dictionary … yet). My project, Autoscope, is the result of years of research, experimentation, trials, errors and correcting those errors. The videos I am putting up here show what Autoscope can do. These are just short clips but you could, if you wanted to, remake an entire feature film or an entire TV series in cartoon form.” 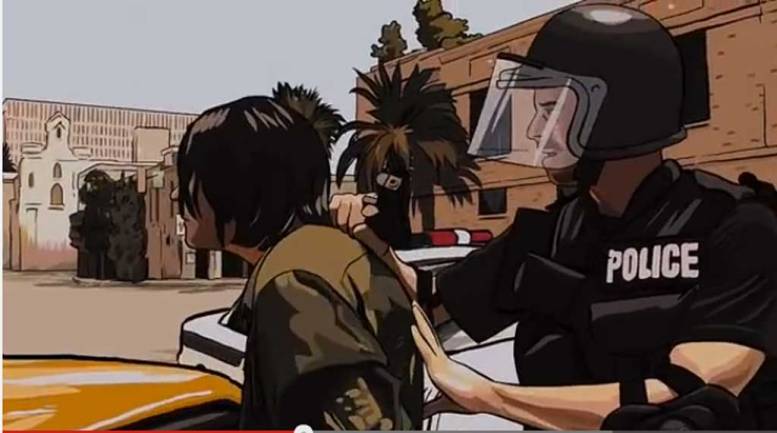 Richard Linklater: A Scanner Darkly 2006. From Philip K. Dicks ominous 1976 novella about surveillance, Linklater uses rotoscoping (Rotoshop) to semi-automate this high-budget, very successful animated feature. The advantage of rotoscope is that you can combine the best of live-action with the total control of the hand-drawn cel animation.

The most famous movies to benefit from automatic or semi-automated rotoscoping tools are of course Richard Linklater’s rotoscoped A Scanner Darkly (2006), and Ari Folman’s Waltz with Bashir (2008). You need to look at these award winning movies.