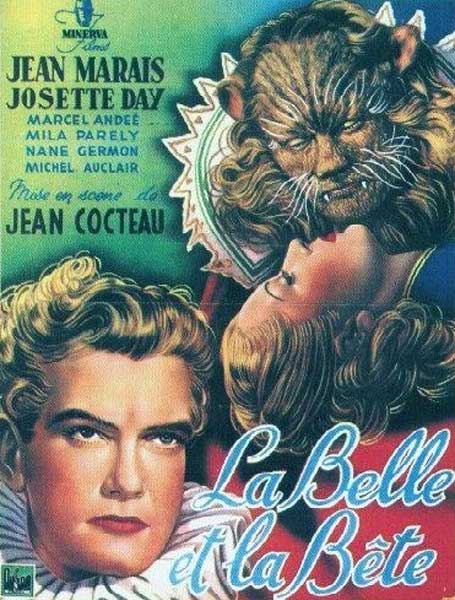 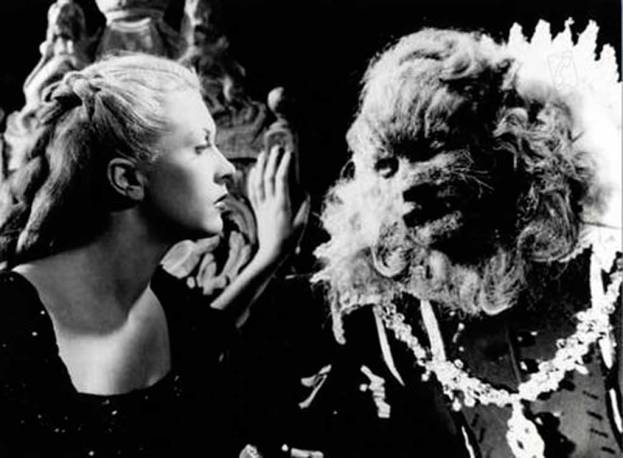 Jean Cocteau: La Belle et la Bete 1946. Josette Day as Belle and Jean Marais as the Beast. The costumes, by Christian Berard and Marcel Escoffier, (and with an uncredited Pierre Cardin as costume-maker); with production-design by Lucien Carre, Antonio Castilo, and Berard, compliment the (uncredited) brilliant prosthetic make-up of the Beast. The fabulous black and white cinematography is by Henri Alekan (who shot the GregoryPeck/Audrey Hepburn modern day fairy-tale Roman Holiday in 1953)

Cocteau’s poetic approach to film-making is summed-up in his collection of writings on Film, published as The Art of Cinema posthumously in 1994.

“A cinema studio is a factory for making ghosts. The cinema is a ghost language that has to be learned. It is incredible for a poet to know this. The day when a director understands that the author’s role is not limited to the script (to writing it) – the day when the author reveals himself – then the dead language of cinema will become a living language.”

“The film unfolds to a perfectly poised slow tempo in surreal settings that gain intensity from the fabulous decor and costumes, the glittering lighting and the many moments of magic effects. The candle-lit shadow-play deepens the gothic atmosphere of the beast’s castle, harking back to early expressionist classics of the genre.”
— Marina Warner

“When Jean Cocteau made his film of La Belle et la Bête in l946, he imagined a beast who has no rival for hideous fascination among fairytale beasts before or since: Jean Marais’s growling, slowed, incantatory delivery, his sweeping, elaborately princely magnificence of apparel, his thick pelt curling out exuberantly from his lace collar and fine linen as he springs and lopes, and, above all, his staring pale eyes in the great leonine and brindled mask of his face with the two sharp incisors defining his mouth, has never been matched for erotic power. He captures a perfect and irresistible synthesis of repulsiveness and attractiveness, which evokes a genuine frisson of desire in me every time I see it; Cocteau’s realization of a dream about the power of love, as personified by Belle, exercises its seduction again and again over me, even while my common sense, my reason, and a long habit of skepticism about romance tell me I must resist.  “ 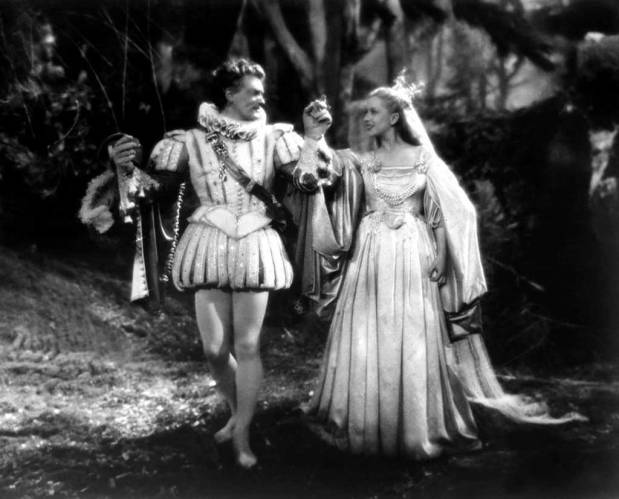 Cocteau’s mythic films are his poetic response to the surge of interest in mythology, mythography and the psychology of myth that pervades this period. (A remarkable period for English writing too – in these years we have J.R.R. Tolkein writing his Lord of the Rings, Mervyn Peake creating Gormenghast, C.S. Lewis and his Narnia chronicles, J.R. Eddison and his Worm Ouroborus, as well as the mythographic analyses of Joseph Campbell (The Masks of God), Robert Graves (The White Goddess), etc), the components of Carl Jung’s writings (Psychology and Alchemy, Flying Saucers – the Myth of Things Seen in the Sky,), and of course Jackson Pollock’s paintings of the early-1940s, exploring Jungian archetypes (eg Stenographic Figure, 1942). Of course, with Cocteau, his primary mythopoeic drive is to interpret the mid-20th century zeitgeist in the forms and with a poetic awareness of the archetypal forms to be discovered in fairy stories, in mythologies, in dreams, in archetypes. 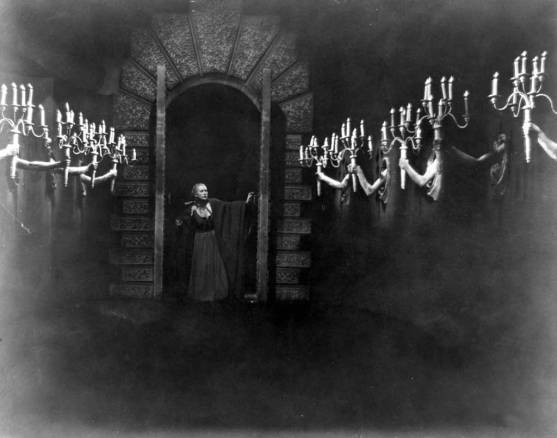 In Christian Berard and Lucien Carre’s gothic sets with the real arms holding the flickering and guttering candelabra, Belle (Josette Day) is lost in a dreamlike corridor in the Beast’s castle.

Interestingly in one of his last publications, the mythographer Joseph Campbell (famous by then not just for his vast body of mythographical work, but also because of his role in inspiring the mythology of Lucas’ Star Wars), describes the role that mythography played in his own quest for self-realisation (Pathways to Bliss – Mythology and Personal Transformation, 2004)

“Myth is not the same as history: myths are not inspiring stories of people who lived notable lives. No, myth is the transcendent in relationship to the present. Now, a folk hero is different from the subject of a biography, even when the hero may have been a real person once upon a time – John Henry or George Washington. The folk hero represents a transforming feature in the myth. When you have an oral mythic tradition, it’s right up to date. In the folktales of the American Indians, you have bicycles, you have the form of the Capitol dome in Washington. Everything gets incorporated into the mythology immediately. In our society of fixed texts and printed words, it is the function of the poet to see the life-value of the facts round about, and to deify them, as it were, to provide images that relate the everyday to the eternal.”  (my italics)

Cocteau is well aware of this poetical driver:

“A film is not the telling of a dream, but a dream in which we all participate together through a kind of hypnosis, and the slightest breakdown in the mechanics of the dream wakens the dreamer, who loses interest in a sleep that is no longer his own”

Cocteau describes the experience of film, in a similar way to how William Gibson describes the experience of cyberspace: “Cyberspace. A consensual hallucination experienced daily by billions of legitimate operators, in every nation, by children being taught mathematical concepts… A graphic representation of data abstracted from banks of every computer in the human system. Unthinkable complexity. Lines of light ranged in the nonspace of the mind, clusters and constellations of data. Like city lights, receding…”